There are no real secrets to eating healthy.  There is a lot of information out there, but for me, it’s about balance, flavours, and routine.  You need to have a good routine to set up your week to eat well, otherwise, you have to resort to options that are quickly available, which may be tasty, but certainly not the best nutritional value for you and your family.  My hubby and I take a few hours each Sunday to do a little cooking ahead that make our lives easier all week long.  On Sundays, we usually make a dinner that we eat that night and also creates enough leftovers for another meal, and then we usually make a one-pot dinner which cooks at the same time.  That will be dinner for at least two nights in the week.  So, with one and a half to two hours of prep, we have four nights of dinner already sorted out!  Yes, it’s two hours on a Sunday, but you will be so thankful you did this all week long!  We also had a fresh salad to most every meal.

Last week, we did a roast chicken, roast potatoes, roasted beans, and salad.  That was Sunday dinner and we knew it would be another dinner that week too.  While the all of those pieces are roasting for about an hour to an hour and a half, you can connect with the kids, read, do chores or have a bath!  While you do this, the house fills with a lovely aroma that might remind you of your Sunday dinners growing up!  At the same time, we often prepare a dish that will cook in the crockpot for Monday that will also be good for at least two dinners.  So, if you are counting, we’ve now taken care of four dinners with one and a half to two hours prep per couple!  Last week our make-ahead meal was a pot roast, which gave us dinner for two nights!

Because I love to add lots of veggies to everything, we had lots of veggie leftovers from the pot roast in a delicious broth, even after two dinners.  It seemed a waste to just throw it away just because there were only a few bits of meat left, so I got the idea to turn my delicious Pot Roast leftovers into an equally delicious beef and barley soup. 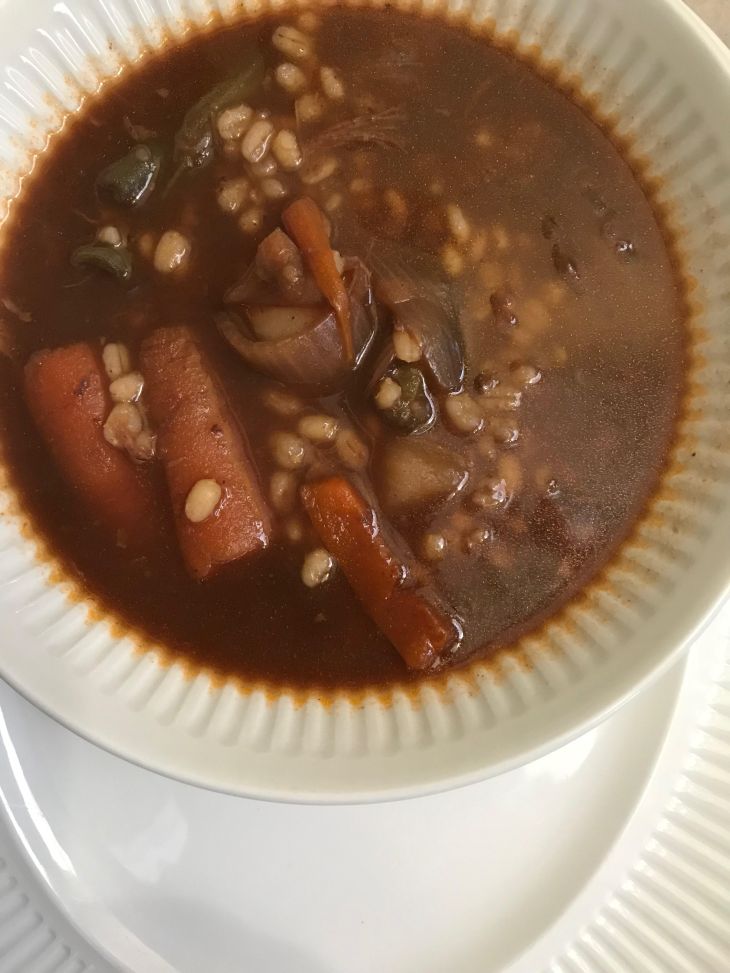 I boiled up a half cup of pearl barley and threw it into the veggies and broth and then we had a few great lunches over the next few days!

I always try to add a lot of veggies to my meals for a number of reasons:

So, a little prep and a little creativity with simple ingredients will give you lots of great meals…be well and enjoy!