In my last post, I talked about our five couple dinner group that’s been together for many years.  Part of the reason that the group has been so successful in maintaining the five times per year joint dinner parties is that the dates are set one year in advance.  Typically, we get together in September, December, February, April, and June. If you’ve caught the subtlety of where I started the year of get-togethers, you might guess that a number of people in the group are involved in education.  September is the start of the new year for educators!! And that means that June is year end!

Our June party happened around the middle of the month, and this is typically the most casual of the get-togethers since it’s a backyard / pool party, and the start of easy, breezy times with family and friends.  As a host, it’s probably the least complicated in terms of food prep. One couple brings appetizers. The hosts barbeque the main course, other couples bring salads and dessert. We hosted the June party and did Greek flavoured chicken and beef brochettes for the main meal, using this awesome marinade my brother made for us last summer.  We also served Greek flavoured lemon potatoes and an interesting side dish that I’d been wanting to try for a while.

About 5 years ago, I cut a recipe out of the Boston Globe Magazine on a trip to Cape Cod for Roasted Peppers Stuffed with Grape Tomatoes that I knew I would love to try.  So, five years later, I finally tried it!!  It was so pretty and elevated the simple, healthy ingredients to something special, and it’s definitely doable for all home cooks!  These are ingredients that I always have on hand and are presented in a way that makes everyone think you did something fancy. To me, that’s the essence of being an ‘Everyday Home Gourmet’….use simple ingredients, make them tasty, and present them in a visually interesting way!  No need for fancy or complicated ingredients or cooking methods! Simple is beautiful…it’s the essence of Mediterranean cooking.

This was the first time I made this beautiful and tasty side dish, and I’ll definitely do it again!  The original recipe involved roasted peppers stuffed with the uncooked tomato salad and served at room temperature.  In our version, we grilled the peppers slightly, then stuffed them with the marinated tomato salad and roasted them in the oven until the tomatoes were warm and slightly blistered. 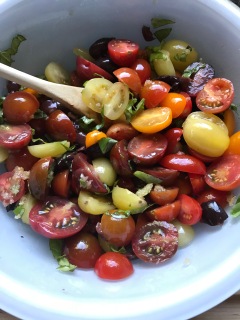 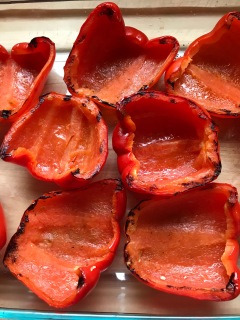 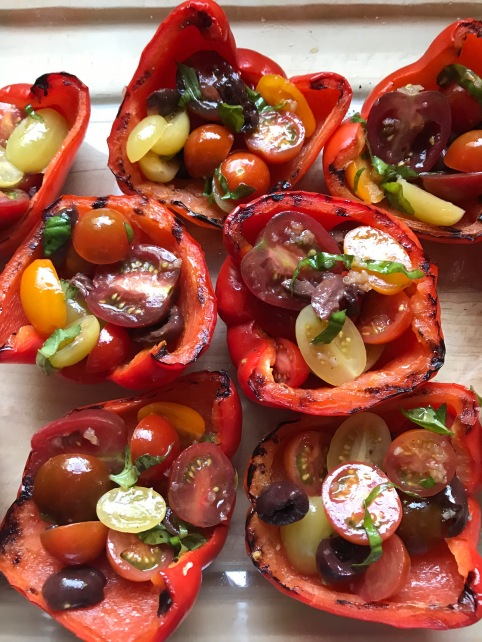 They were delicious and would be amazing as intended in the original recipe or warmed as we did. The key is to roast the peppers enough to get grill marks and the amazing roasted pepper flavour, but still keep the peppers firm enough to stuff.  Also, the original recipe called for sardines, but I’m not a big fan of sardines, so I used sliced Kalamata olives instead to get the salty flavour and contrast in texture as compared to the tomatoes. This can be made ahead and is such a pretty and tasty dish that will satisfy and impress your guests!  I love healthy everyday ingredients that are elevated into something special! It’s what makes the ‘everyday turn into home gourmet’….Happy cooking everyone!  Experiment and be well.

If you need an easy and delicious recipe for Roasted Red Pepper and Tomato Soup, this is the one! Only 3 simple steps! Head to my blog for the details. Link in bio. This uses pantry staples, including my favourite brand of canned tomatoes @mutti_canada They taste super fresh and are a great substitute for canning your own! (#notsponsored ) I received this recipe through a recipe exchange chain letter! Head to my blog for the story. This would also be a great recipe to serve chilled in the warmer months! Also can be Vegetarian and Vegan by using vegetable broth instead of chicken broth. #homemadesoup #pantrystaples #everydayhomegourmet #roastedredpepperandtomatosoup #glutenfreesoup #vegetariansoup #vegansoup #muttichallenge #madewithmutti
Happy Birthday to my wonderful Hubby! I can’t remember the last time I made a birthday cake! I love cooking, but I’m not the best baker and usually rely on the wonderful creations of my friend, @cakeslaurenmakes for special occasions. With the times we’re in, I decided to try to make something Gary would like with what we had on hand. So, I turned my Mom’s delicious brownie recipe into a double layer chocolate brownie cake...these brownies are always a hit when my Mom makes them and this brownie cake got a big 👍! It’s extra rich as a cake, so most people would eat small slices! My hubby is not most people 😂! Unsweetened chocolate, eggs, butter, sugar, flour and a little milk are all you need for this! That’s why it’s a great pantry recipe. I was going to garnish it with a golf ball, but I didn’t want to remind him of what he’s missing 😂 so the fruit became the garnish! #browniecake #chocolatebrowniecake #momsrecipe #everydayhomegourmet #usewhatyouhave #birthdaycake #pantrybaking
Now why did it take me so long to remember this kitchen tip? 🤷🏻‍♀️. Wash and cut up your celery and put it in a container with water to make it stay fresh and last longer...it might also help everyone in the house to grab some for a snack. I don’t know why I just remembered this last week, because my Mom always did this when we were growing up and celery with cream cheese boats was a popular snack for us! It’s so easy to use for recipes once the celery is cut and washed! Give it a try! #kitchentips #cutcelery #celeryandcreamcheese #momskitchentips #momalwaysknows #makeitlast #getthemostoutofyourveg
I made a batch of oatmeal raisin cookies today just because...they remind me of home...in the years my Mom did not work outside the home, we often came home from school to the sweet smells of Mom’s delicious baking. These were part of that regular rotation. I like making them too because they are filled with ingredients I almost always have on hand. Oats Raisins Butter Eggs Milk Flour Sugar Salt Baking sofa Cinnamon And, the recipe yields 3 dozen, which is more than enough to enjoy at home and share with others! What’s your go-to cookie? Taste of home? #oatmealraisincookies #homemadecookies #everydayhomegourmet #eattogether #tasteofhome #thanksmom
Back to the bread maker for some delicious pizza dough...this week’s Friday pizza night was a 17” x 12” rectangular pan pizza...lots of leftovers to freeze for later. The toppings were roasted garlic, Italian sausage, rapini, sautéed portobello mushrooms, Parmesan and mozzarella cheese. Delicious! We are doing our groceries almost exclusively on-line in these times. I ordered rapini and got Broccoli Rabe, but it worked well too! #homemadepizza #fridaypizza #sausageandrapinipizza #eatinisthenewtakeout #eattogether #everydayhomegourmet #roastedgarlic #usewhatyouhave #justlookinthefridge
I’ve always been grateful for freezers and even more so now. Here’s the last of my Christmas baking! I’m so glad that I’ve turned my family’s classic cake and loaf recipes into mini loaves thanks to my mini loaf pan. This enables me to have some beautiful mini cakes to slice up and serve at different times of the year. This is my Mom’s delicious carrot cake recipe. Cream cheese frosting and Brazil nuts make it special. It’s great to be able to enjoy a little taste of this! Do you have anything hiding in your freezer that you are saving for later?#christmasbaking #whatsinyourfreezer #carrotcake #miniloaves #everydayhomegourmet #creamcheeseicing #creamcheesefrosting #brazilnuts